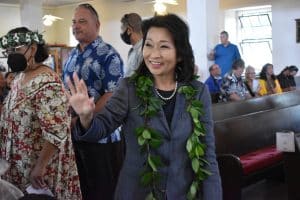 Lieutenant Governor Sylvia Luke (she/her) was sworn in on Monday, December 5th. She is the State of Hawaiʻi’s 15th lieutenant governor and the third woman to hold the office.

Sylvia was first elected to the Hawaiʻi State Legislature in 1998, where she served until 2022. During her twenty-four-year tenure in the State House, she had many roles, but most notably as the Chair of the Finance Committee where she developed a reputation of bringing transparency and accountability to the State budget.

Born in South Korea, Sylvia immigrated to Honolulu at the age of nine with her family. She attended Queen Kaʻahumanu Elementary School where the kindness of her 5th grade teacher helped her learn English. She later graduated from Roosevelt High School and then the University of Hawaiʻi at Mānoa. Her first introduction to public service was in college when she was elected as President of the Associated Students of University of Hawaiʻi. Following her undergraduate degree, she continued her education at the University of San Francisco School of Law.

Throughout her career in public service, she has been recognized by many organizations for her advocacy. The Healthcare Association of Hawaiʻi recognized her work to advance health care initiatives and pass the “Our Care Our Choice Act.”  She co-chaired the House committees that were instrumental in the passage of marriage equality and championed a law that would provide all three- and four-year-old children access to early education.

Sylvia is a wife, mother, dog mom, former practicing attorney in Honolulu – and the first Korean American politician elected to a statewide office in the United States.